The Evangelizing Sisters of Mary is a growing Community. As an African Religious Missionary Congregation, though it has many vocations, the biggest challenge in the Congregation is that; some tribes/cultures, a girl is given out for marriage in terms of dowry. Therefore, some parents are still struggling to allow their daughters to join a Religious life. Though it is an outdated practice, we still face it though we still give education to the parents, many of them are still rooted to the past practices. 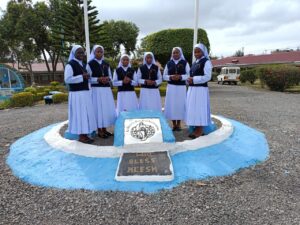 To them, it is a life wasted. So, we are to make a lot of efforts in educating these parents to forego some of these cultures that are no longer in use.  We call upon the parents to accept the evangelized culture that suits the people of God according to the signs of time.

The need for qualified personnel in all fields of evangelization is a still a challenge to gain a new demand to approach the proclamation of the Gospel and new inventions in human Societies, the Evangelizing Sisters of Mary commit themselves to carry out the Mission of Christ. To go out to meet people without waiting for the people to come to them. They Evangelize in season and out of season. Moving to the areas that are neglected and with marginalized people. Identifying themselves with the sufferings as Christ did.

Stages of Formation in Religious Life:
The Evangelizing Sisters of Mary are Missionary by Nature. They admit girls from all over Africa without excluding any other part of the world. Anyone called by God can always join them as long as they have the following requirement: Age 25 and above depending on her qualification. If she is a graduate, it means the years have gone higher because she was a student somewhere. Acceptable grades are: “C+” and above or “C” with a course from a well recognized College or University.

Aspirancy & Postulancy:
This is the period of one year following the entry into the Congregation in which the young woman gets to know the Congregation and the Congregation gets to know her better. She takes part in daily prayers and activities of the Community and attends classes to learn about religious life.  She is to gain knowledge on Religious subjects such as  Scripture, Catechism, Church Documents, the theology of beginners, History of the Church, History of Founders and of the Congregation and its Charism. She is guided to make the gradual transition from the lay life to the life of the Novitiate. At the end of the year, she discerns whether it is God’s will for her to continue with the next step she is to undertake.

Novitiate:
Novitiate is of two years programme. During this time, the Novice continues to deepen her Religious formation and the knowledge of the Congregation and its Charism. The 1st Year Novices also studies the vows, the Rule of life and traditions that govern the Congregation. The first year Novice is primarily dedicated to study and development of the interior life. The second year Novices are introduced to the apostolic life in the Congregation. Since this is an important time in the life of a young religious, all norms of activities  that are not in line with the primary purpose of the Novitiate are excluded. At the end of the two years of formation,  the novices are allowed to make their first profession by committing themselves to the vows of Chastity, Poverty, and Obedience for one year renewable every year for three years. When six years are over, a temporal professed Sister requests in writing to make the vows for all her life in the Congregation.

Temporary Profession:
The temporal profession is a period of six years. During this time, the Sister renews her vows every year for three years, then three years at ago, for a total of six years under temporary vows after which the Sister requests through writing an application to the Superior General to be allowed to commit herself for all her life in the Congregation.

After perpetual profession, the Sister continues with the on-going formation, which is for lifelong. She is to keep on updating her Religious life by Spiritual renewal and attending sabbaticals.